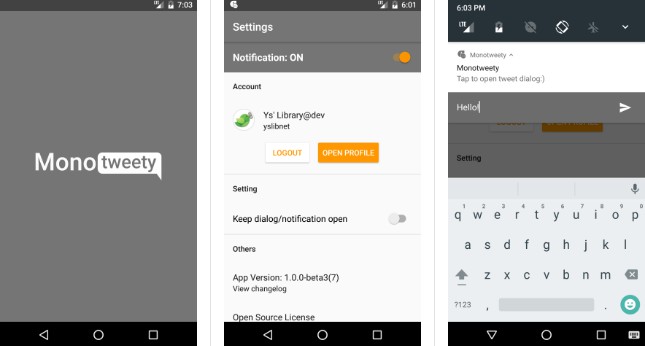 Monotweety is Twitter client app which specializes in tweeting right from your device's notification area.

When you tap the notification, editor dialog will be launched, and you can tweet from there.

If your device is Android 7.0 or up, you can literally tweet from your notification area.

An Android app which provides useful information about the environment and can be used offline (designed for hiking / mountaineering).

Proof of concept e-mail (JMAP) client (pronounced "Letters"). Makes heavy use of Android Jetpack to be more maintainable than some of the other Android e-mail clients.

A lightweight app for handling your calls, no matter where are you. Comes with a handy call log for easy call initiation.

Flexible utilities to control and animate zoom and translation of Views and much more - either programmatically or through touch events.

A mock application for a coffee shop.