A lightweight "about screen" library to allow quick but customizable attribution in Android apps.

Attribouter is a lightweight "about screen" for Android apps, built to allow developers to easily give credit to a project's contributors and open source libraries, while matching the style of their app and saving the largest amount of time and effort possible.

It is meant to use GitHub's REST API to fetch and display information about open source projects and contributors, but it allows you to define some or all of its data in its configuration file in your app as well.

This is just sample data. It is not real. Though Jahir is lazy, so that part is (joking). 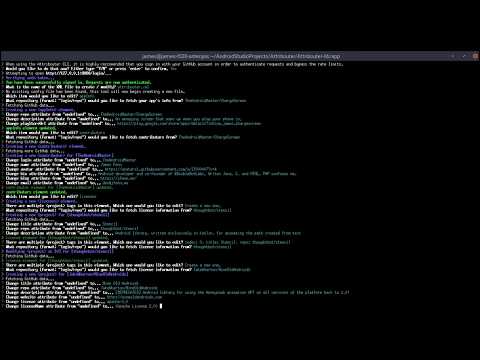 For demonstration and experimentation, an apk of the sample project can be downloaded here.

The Gradle dependency is available through jCenter, which is used by default in Android Studio. To add the dependency to your project, copy this line into the dependencies section of your app's build.gradle file.

This is pretty simple.

This is also pretty simple.

This library does not use an auth key for the GitHub API by default. It does cache data for up to 10 days to avoid crossing GitHub's rate limits, but if your project has more than a few contributors and libraries or you want it to have access to a private repository, you will need to provide an auth token by calling .withGitHubToken(token) on your instance of Attribouter.

If you simply want to create/update a configuration file based on a GitHub repository as quickly as possible, then the Attribouter CLI is an easy solution.

The configuration file consists of a single root element, <about>, with several possible child elements that can be added any amount of times in any order. You can either make one by looking at the configuration file of the sample app for an example, or by using the list below.

Displays the app icon, name, version, and links to the project on github and its website if available.

Auto-generated links for the <appInfo> tag are as follows:

A block of text.

Shows a list of the contributors of a project on github, merged with a list of child <contributor> elements defined in the configuration file. For example, if a user with the login "TheAndroidMaster" is both in GitHub and the configuration file, its attributes will be merged so that any attributes beginning with a "^" character will override the information from GitHub, and any attributes not beginning with a "^" character will be used while the GitHub information is loading, or if the information from GitHub is not present or unavailable.

Attributes for this tag are the same as the ones described under the <appInfo> tag above.

Auto-generated links for the <contributor> tag are as follows:

A list of the translators of this app, sorted into sections by the language(s) that they have translated. Child elements are <translator> tags.

A list of the open source licenses used by the project. Child elements are <project> tags with attributes that function similar to the <contributor>s ("^" overrides GitHub values, otherwise they're replaced by the GitHub data), except the repository is defined by a repo attribute (starting a value with "^" is obsolete if the repo attribute is not defined).

Attributes for this tag are the same as the ones described under the <appInfo> tag above.

Auto-generated links for the <project> tag are as follows:

Snap Chat like home screen with MotionLayout.
25 September 2019
Animates a progress bar to the first active step in the sequence and then periodically runs a pulse animation on that step.
24 June 2018
UI library that helps you to make a cute collection of collapsible/expandable pages
28 May 2018