Gradle Plugins: Why? How?

There is some misunderstanding and confusion about the concept of Plugins in Gradle.
This is unfortunate, as it is one of the central concepts of Gradle.
This README, together with the examples in this repository, aims at clarifying the most central points and questions.

For a quick introduction on the topic, you may also watch this 5min video: 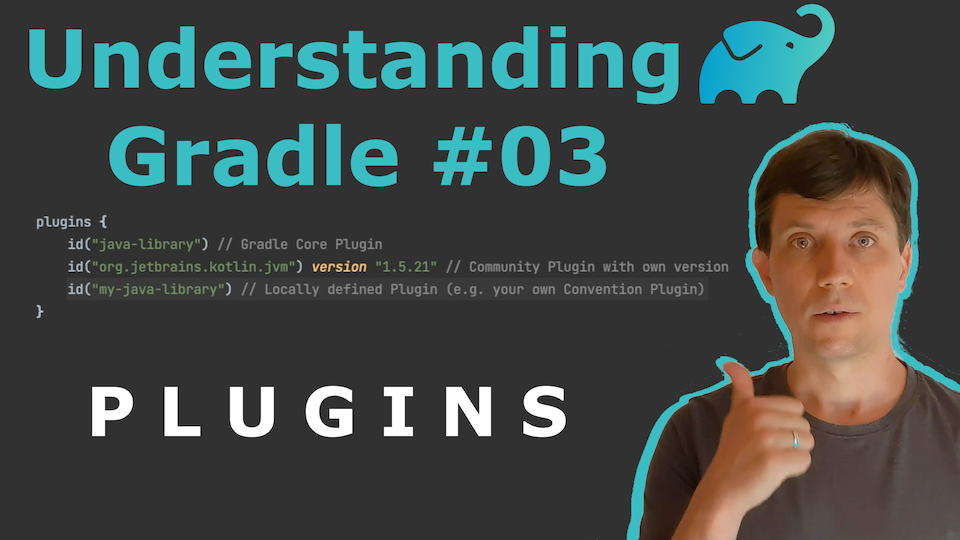 I only use Gradle in my Java/Android application multi-project – do I need to write plugins?

Yes. Plugins are the mechanism to put build/project configuration in a central place.

Do I need to learn Kotlin or Groovy to write Gradle plugins and to configure my build?

No. You can use Java (or Scala) if you prefer.

What is a ‘Core Plugin’?

The term core plugin refers to a plugin that is part of the Gradle distribution – for example id(“java-library”).
It is always available.

What is a ‘Community Plugin’?

The term community plugin refers to a plugin published to the Gradle Plugin Portal or another repository – for example id(“com.diffplug.spotless”).
To make a community plugin available so that you can use it similarly to a core plugin, you need to declare the repository that provides the plugin –
for example: repositories.gradlePluginPortal().
And you need to define a dependency to the plugin – for example:
implementation(“com.diffplug.spotless:spotless-plugin-gradle:6.1.0”).

What is a ‘Convention Plugin’?

The term convention plugin refers to a plugin you write yourself in a plugin build (aka build logic or builSrc build).
It is a separate Gradle build that you link to your main build by using the includeBuild() statement in the pluginManagement {} block of your settings file – for example includeBuild(“gradle-build-logic”).
A convention plugin usually composes existing core plugins and community plugins and configures them with your own conventions – for example setting the Java version via java.toolchain.languageVersion.set(JavaLanguageVersion.of(17)).

When do I NOT need to write a plugin?

You do not need convention plugins when your project is small and isolated so that it does not consist of multiple subprojects.
That is, you only have one build.gradle(.kts) script.
In this case, you can do all the build configuration in this one script and apply community plugins directly with a version (without dependency declaration) in that script – for example id("org.jetbrains.kotlin.jvm") version "1.5.21".

My projects are small, but I have many of them in a multi-repo setup – what now?

Do I need to use a specific way of implementing a Plugin to use a certain Gradle feature?

No. In all cases, all features are accessed through a Java API. You can choose freely between the options presented below.

I… have more questions

Please ask by opening an issue.

The choice of how to implement a plugin is purely technical and depends on your and your team’s preference of language and tools.
Some considerations are listed below.

If you intend to write a plugin for local use ony (convention plugin) or for publishing it to share it between multiple builds in different repositories for a wider audience (community plugin) does not influence this choice.

Choices for implementing a plugin

Technically, (1) and (2) are called pre-compiled script plugins because Gradle will generate a class – similar to option (3) – from the Gradle DSL script.

This repository contains an example in 7 different flavors using different approaches/languages.
You can download one of the examples to explore or as a starting point for your own project (via download-directory.github.io):

Here are the typical things you need to do when writing a plugin.
They are shown here as a list of successive commits in this repository.
Each commit does the corresponding thing in all 7 approaches.
It is exactly the same thing in each approach just with different syntax.
This helps to understand the differences between them.

The example project does not contain any source code, but is ready for Java development.
If you open the project you downloaded with IntelliJ IDEA, you can create Java source folders and files through the IDE.

To build the project:

Other resources and feedback

This repository is about explaining the different technical approaches of writing plugins.
It’s not so much about how to actually configure specific things in Gradle.
It only shows examples of the most prominent things (Extensions, Task Configuration, Dependency Declaration).

Which Option should I choose?

Here are a few things to consider.
There is no one-fits-all right choice.

But there is the good news that all approaches can be combined.
If you split your build configuration into many small plugins, which you should do anyway for good structure and readability, you can use a different approach for each plugin.
Thus, if at some point you want to migrate from one approach to another, you can do it step-by-step.

Here is a non-exhaustive list of aspects you may consider when making the choice.

Technical/performance considerations and other caveats