Proxidize Android Legacy is an Android application that enables anyone to make 4G or 5G mobile proxies using their Android phones without the need of anything else. Just download the app, hit connect, and your mobile proxy will be automatically generated.

Proxidize created Proxidize Android as a proof of concept for Proxidize MPM (Mobile Proxy Maker). The app accomplished its purpose, but was eventually taken down from the Google Play Store for reasons mentioned below.

With the rise of Russian & Chinese Proxidize MPM copycat apps, and after seeing the damage these can cause to the community of proxy users with the recent scandal, we decided to open source this app to protect the users from falling prey to any botnet apps. Further read: Proxidize copycats, a story of greed & international crime syndicates

Proxidize Android Legacy is the predecessor of the upcoming Proxidize Portable application which will solve all the shortcomings of this app.

IMPORTANT: Proxidize Android was marked as a false positive Potentially Unwanted App (PUP) or Riskware due to it containing a local proxy server. This is nothing to worry about, but you can read more about this below and find the instructions to build the app from scratch.

Proxidize is a multi-national effort started by a team of engineers to democratize access to proxies, web data, & automation. Read the Proxidize manifesto

How It Works & Architecture

Proxidize Android Legacy works by establishing a connection to a tunneling server via reverse proxies and then launching a local HTTP proxy server. This makes the proxy accessible from anywhere on the web, as the tunneling server handles the port forwarding and routing.

The application will select a random port between 10000 and 60000, use it connect to the client and then create a proxy server based on the random port along with a randomly generated username and password.

This app is not a replacement for Proxidize Mobile Proxy Maker, but a proof of concept. You can use this app at a small scale for personal projects, but once you need a commercial-grade solution, you’ll need Proxidize MPM for the following reasons:

To build your own 4G proxy farm, all you need is: 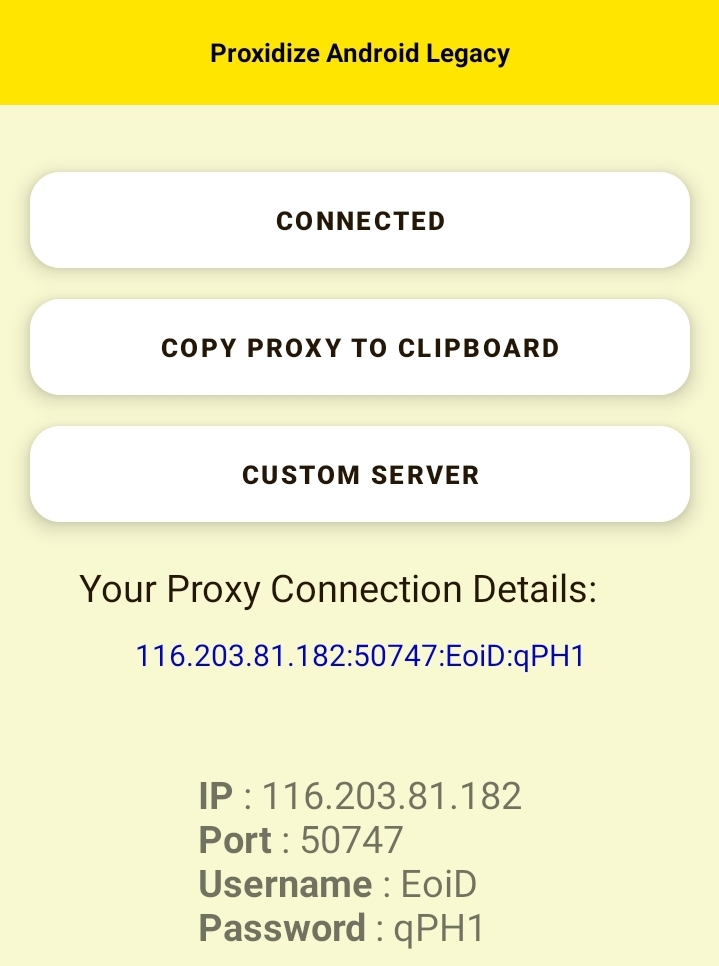 You can rotate the IP by having any macro app automatically toggle airplane mode on and off. 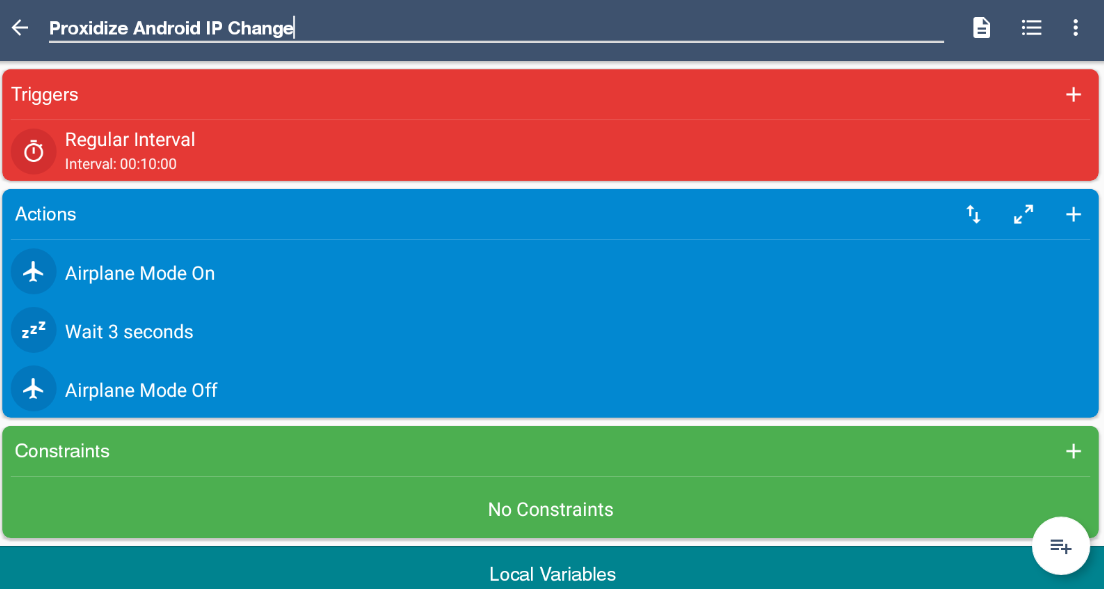 To automatically change the IP address, you can use a macros app such as MacroDroid which we’ll use here.

And now your IP will automatically change every set amount of time as you specified in the interval.

Deploying Your Own Server

TOKEN is used to authenticate which clients are allowed to connect to this server. It can be any random set of characters such as 12345678.

setsid is used to keep the process alive after you close the terminal.

Binding Port = The port your selected.

Token = The token you selected.

Using the App Without Connecting to the Tunneling Server First

Types of Issues That You Should Report:

How to Report the Issue:

Any issues unrelated to the app will be closed, such as:

This app is no longer maintained by Proxidize, but I (Abed) will be working on it in my free time.

In order to build all the binaries from scratch, you’ll need to:

Why is the app marked as harmful app/malware by Google?

A few months after publishing the app, Google marked it as harmful/PUP/malware app. I suspect it’s because there’s some Google watchdog that sniffed the traffic and found something harmful that was being transmitted by some of the users. Or it’s possible that the behavior of the traffic being unencrypted and routed to a single server was similar to typical harmful app behavior that come across Google in the Play Store.

There are also a few AVs that have marked the tunneling client, frp, as a PUP, and it’s possible Google Play Store did the same.

I’ve made some mitigations against this by changing the binaries to change the hash, but I suspect Google will still mark it as harmful by reading the strings, so you will need to disable Play Protect, otherwise, it’ll get automatically deleted.

Exit the app and start it again. There’s a very small chance you used an already used port.

My proxy stopped working after it used to work, can you help?

Exit the app and start it again. If it still doesn’t work, make sure the app is still running on your device. Then please tweet @Proxidizehq and we’ll take a look.

Why is my proxy slow?

The app uses reverse proxies created via websockets route to forwarding facing proxies. This technology is slow, unreliable and there’s nothing I can do about it with the limited time that I have to work on this project. Apps based on this specific tunneling technology were created for simple IoT use cases, and not for pushing full bandwidth or proxies.

The Proxidize team is working on an entirely new app called Proxidize Portable, which will address all the short comings of this app using proprietary technology.

Another thing is such apps send both incoming and outgoing traffic from the same device, which means you will always get half the speed that you would normally get when testing the speed directly on your phone. If speed is important, you should use the full Proxidize Mobile Proxy Maker

Where will this app work?

This app will work everywhere, unless:

I keep getting a 407 Error or the proxy keeps asking for authentication?

Make sure you’re not mixing the small l with a capital I.

We are currently working on a new application called “Proxidize MPM-Cloud Portable” or Proxidize Portable for short. The new app will address all the deficiencies of this one and will have the following features: